Rain started around 10:00 p.m.
Henry got to South Lakeshore Drive at 10:15, Michelle got there at 10:30 p.m.
We walked one pass on the road and met one of Ms. McBrayer’s students walking the road.
No salamanders were seen and only 1 frog.
We walked to the south side of vernal pond to look for salamanders in the pond.
Henry – 1 or 2 Spotted Salamanders in the water west side of downed tree, another one on the east side of down tree.
Michelle saw 1 Spotted east of down tree and 1 on west side.
We walked along the road to look in the pond from the road side, but didn’t see any.
There was a bright flash of light and then a big crack of lightning so we headed to our cars and home at 11:45.
Soon after arriving home, Jim Brown texted to say he saw a Spotted crossing road, 11:50.
Jim has been watching for spotted salamanders for over 50 years, starting in winter of 1971-72 and first introduced us to them in 1998. He continues to monitor them each year.
Jim reported that on one of his “sweeps” driving west toward HHS slowly in his car, about midway, he saw a barred owl fly low right over his car, also heading west. Jim’s observations have been that salamanders prefer the heaviest of rains because it makes it harder for predators to see their motion in all the commotion of big raindrops on puddled roads.
Around 12:10: Jim reported 3 Spotted and 1 Leopard frog
Henry drove back over.
The temperature was 55 degrees.
12:30: Henry reported 1 Spotted
12:36: Henry reported 1 Spotted
12:45: Last Spotted reported by Henry
Jim left at 12:15, Henry left at 12:55
In all: 6 Live on Road (LOR) Spotteds, 1 LOR frog, 3-4 Spotteds in pond

Rain continued at different intensities all night long and until 9:30 or 10:00 a.m. Thursday.
Since Wednesday night to Thursday morning – .75 inch of rain. It never rained hard for long.

Friday, January 3, 2020 (two years ago)
All day rain on Thursday, January 2. Henry checked South Lakeshore Dr. before coming to our board meeting around 6:45. He didn’t see any salamanders and said the rain had let up. It rained again on Friday, from about noon on into the evening and at times fairly hard. There was a basketball game at the high school so quite a few cars were traveling South Lakeshore Friday night.

Ken and I made a pass in our vehicle along South Lakeshore Dr. around 5:45. Melonie McBrayer also checked around 6:00ish. Henry Hughes was there around 6:30 to 7:00. I went back around 7:10 and walked the road 2 to 3 times. Dr. Bakkegard was already there when I arrived and was walking the road and checking around the pools. Paul and Jack Freeman arrived around 7:30. They walked the road, walked around the pools on the south side of the road and walked part of the Forest Preserve trail looking for signs of salamanders. We all checked in the pond (s) for egg masses, salamanders and spermatophore, but saw nothing, except a DOR Leopard frog. We left around 8:15. The rain was mostly gone at that time. Betsy Dobbins checked the area just before dawn and didn’t see anything.
Michelle

Friday, January 10, 2020
Rain was predicted. I looked outside before going to bed at 10:30 and there was no rain yet. I never heard it rain later. Jim Brown has better ears than me and he heard rain and went to look for spotted salamanders. Here is his report:
Michelle, Kristin & Megan:
I finally caught a nice Spotted for folks to handle at the festival — in a brief shower about 12:45 last night (the only salamander I saw and he was headed north across the road).  I’d made several passes in the half-hour before that, in little to no rain, only saw leopard & small bullfrogs.  I had stopped the car for about the third frog hopping across the road, when a barred owl swooped down on it.  It sat there a few seconds, turning its head towards the car and then away from it, finally flapped off into the woods with said frog.  Made me realize why Spotted salamanders usually wait for heavy rains to migrate.  Made me wonder why frogs don’t….
Jim

Monday, January 13, 2020
Rain was predicted for the evening and it started to rain in Homewood around 4:45. It was raining steady by 5:00, but it was still light outside. Dr. Kristin Bakkegard was out of town and headed back home and texted to see if someone was watching for Salamanders on South Lakeshore. I texted back that I would be there at 5:30 when it was dark. On my way over, Henry called and he arrived at South Lakeshore shortly after I did. I did the most stupid thing, I forgot my flashlight. I had remembered my umbrella, camera, and rain coat, though. So, first, I drove the road and didn’t see any salamanders. I parked on the High School side and walked east using my phone flashlight. The road had a fair number of cars coming from both directions and I was very cautious about getting off the road when one passed. At about 5:45, a car drove up next to me, and it was Henry. Right at that moment, we saw our first salamander. It was only about 4-5 inches long and in the middle of the road. I hurried to walk back to the high school side and Henry drove to the east side of South Lakeshore. We put up barricades left by the City of Homewood for us, simultaneously. It is hard to do this with less than two people, unless there is no traffic. Then we walked the road – on the first pass, we saw two more live on road (LOR) spotted salamanders, two dead ones (DOR), and a webster salamander. Later, in the evening, we saw 3 more LOR, all about the same size as the first one and all looked to be males. The rain was intermittent. On passes when it was raining harder, we were more likely to see salamanders. The majority were seen near the east end and some were seen near the Forest Preserve entry. Dr. Bakkegard arrived near 7:00 and after she checked for salamanders on the western section of South Lakeshore. She didn’t see any. I left South Lakeshore around 7:30-7:45. Henry and Kristin kept walking the road and saw 6 more spotted salamanders, a webster and a two lined. Stephanie, who contacted us through our website came out and walked with Henry and Kristin. Scott Hofer came out with his two sons. So, in total, Henry, Kristin, and Michelle saw 12 LOR and 2 DOR spotted salamanders, 2 websters, and 1 two-lined. The rain let up later in the night and the barricades were removed. Temperature was around 64 degrees at 6:00 p.m.
Michelle

Saturday, January 18, 2020
Jim Brown was watching the weather and we agreed to check for salamanders around 5:30 p.m. The weather looked to be backing off, but some lite rain was falling around 6:00. We did a pass on the road and found no activity at all: no salamanders, not even websters, no frogs, and the temperature was dropping. We returned home.
Michelle 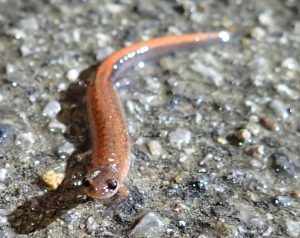 Tuesday, February 5, 2020
We had a light shower before dark this afternoon. Then, light rain started around 7:15-7:30 p.m. and Henry and I hurried over to South Lakeshore Drive to survey the road for Salamanders. It was 62 degrees and the rain had picked up on the drive over. A small event was getting over at the high school on the gym side of the school. Two school buses were preparing to leave along with several cars, as I walked from Homewood High School (HHS) to almost Covenant Pres. Church. On that first pass, I saw 7 dead (DOR-dead on road) leopard frogs, and 1 live (LOR – live on road) webster salamander. On my pass going back west, I stood beside a large spotted salamander (probably female) in the middle of the road, holding my umbrella and shining my flashlight toward an oncoming car that stopped and wondered what was going on. I met Henry half way back toward HHS. Each of us had seen a spotted salamander, so Henry returned to the west and I went east to put up barricades the City of Homewood has provided for our migrating salamanders. It was pretty quiet at HHS last night after the school buses left, so our barricades detoured only a very few people. On my pass after putting up the east barricades, I saw three more spotted salamanders. Henry, saw some on his pass also. During the next hour as we walked the road, we were joined by Jay Eubanks, herpetologist; Brandon ?, teacher at Hall Kent; Professor Malia Fincher, Samford University and her children; Professor Megan Gibbons, Birmingham Southern College; and Paul Freeman, board member of Friends of Shades Creek. The rain had slacked off and we did not see any more spots, but we saw lots (I saw around 20-30 LOR for the night) of websters out on the road, several LOR leopard frogs, and several millipedes taking advantage of the wet night for safe travels. Our group of humans checked out the south side wetland pool and I saw one or two spotted salamanders laying on the bottom of the pool. Their bodies blended into the leaf litter on the bottom and they looked like sticks laying in the pool. Megan also, saw two more in the pool. Also, seen in the pool were tiny freshwater shrimp and many small crayfish. Paul Freeman, crayfish expert, caught a 3 inch crayfish that we examined and returned to the pool. We left the South Lakeshore area around 9:30 p.m., in only lite sprinkles, leaving the barricades up because rain was predicted for around midnight. I heard the rain sometime around 11:30-12:00 while in bed, but did not go back to check, knowing we were protecting any migrating salamanders with the barricades. Rain is predicted for tonight, Wednesday, February 6. We plan to be on South Lakeshore at dusk if it is raining tonight.
Michelle