The following stream walk reports present some of his findings related to the 3 major urban tributaries of Shades Creek and list some of the strange items James has found in the creeks: 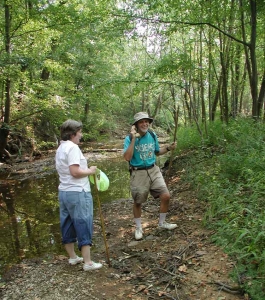 Why did Mr. Shadey and a turtle drink a Pepsi in a ditch? Read about their adventure in Scott's Branch!
Read more

Watkins Brook is one of Mr. Shadey's favorite places to play sports, read books, and bring his kids. See why here.
Read more

Read about the time that Mr. Shadey found everything plus the kitchen sink in Griffin Brook.
Read more
Page load link