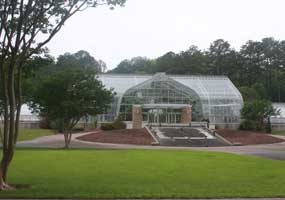 We will meet at the front entrance of the Birmingham Botanical Gardens on May 14. Fred Spicer, Executive Director and CEO of the Birmingham Botanical Gardens will lead Friends of Shades Creek on a tour of the stately Conservatory, designed in 1962 by the noted glasshouse designer, Dr. Henry E. Teuscher of Montreal, Canada. The current three-house configuration was manufactured by Lord & Burnham, considered the foremost company of its kind for over a century. The building’s modernist style, exemplified by the slanted eaves, is highly unusual in their catalog and only a few examples were ever built. Phase I of a major renovation was begun in late 2012 and marked the structure’s 50th anniversary. New permanent exhibit designs, by landscape architect Rodney Robinson & Associates, Wilmington, DE, were approved in 2013 and will be installed as funding allows. In these, important themes of water, conservation and story-telling are woven through artfully designed displays, engaging features and beautiful and meaningful plant collections. The Tropical House is the largest clear span glasshouse in the Southeast and shelters a diverse collection of luxuriant tropical plants. The Arid House will show the unique ways water appears in dry climates. The former Camellia House will be transformed into an Eco-House, using solar panels to highlight educational elements and a Gulf of Mexico estuary display. 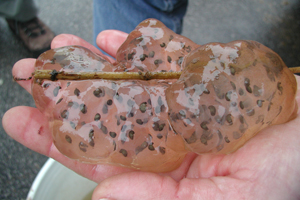 Everyone knows that amphibians spend part of their lives in water and part on land—that description is clear from their name–“amphi”, meaning “of both kinds”, and “bios”, meaning “life.” Eggs are laid in the water, and after spending some time as aquatic larvae, they turn into terrestrial adults, right? Not so fast. Amphibian lifestyles are much more complex than you think. Even in North America, some species lay their eggs on land and have tiny offspring that look just like miniature adults. Others never leave the water, even as adults.  And in other parts of the world, the different reproductive strategies seem endless! Amphibians have more flexibility in their reproductive strategies than any other group of vertebrates. Dr. Megan Gibbons will present some of the amazing reproductive adaptations of amphibians, including frog embryos in trees that can detect and escape snake predation, adults that tote their tadpoles from nests to nurseries, and moms who swallow eggs and rear their young in their stomachs. Who knew amphibians had so many options? Dr. Gibbons is a Professor of Biology at Birmingham-Southern College. Her areas of research include amphibian ecology and behavior, particularly heritability of behavior and maternal investment. She earned her B. A. from Emory University and her M. S. and Ph.D. from University of Louisiana at Lafayette. 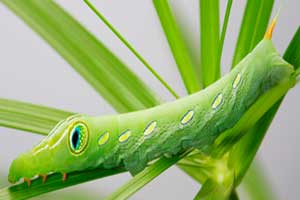 It’s not easy being a caterpillar. If you aren’t being hooked, sliced, sticky trapped, or poisoned by your host plant, you are being hunted by an endless number of vertebrate and invertebrate enemies. Caterpillars are attacked by birds, mice, squirrels (yes, as in squirrels), ants, wasps, stinkbugs, and various carnivorous larvae. If that isn’t enough they are also co-opted as breeding chambers by an insidious array of parasitoids such as braconid wasps, tachind flies, and myrmithid nematodes. These enemies lay eggs onto or into caterpillars and once the larvae hatch they eat the caterpillar alive.  Caterpillars however, far from being helpless bags of leafy hamburger have many defenses both devious and obvious to thwart their foes. This talk discusses how caterpillars meet their many challenges and somehow manage to survive long enough to metamorphose into butterflies and moths. Dr. Gentry has expert eyes to detect some of the smallest and least seen creatures in the forest – caterpillars that have perfect camouflage to remain hidden on or under a leaf or rolled and hidden inside leaves.

“Trying something, learning from it, and being an example to the community is a win in my eyes.” Julie Price, Ph.D., will admit that her mind has been in the gutter lately. She’s figuring out how to funnel the abundant rain that falls upon UAB and repurpose it for watering campus green spaces. She also intends to maximize UAB’s other natural resources – namely, the bright ideas of its students and employees and the power of its research – to make UAB a greener, more efficient university. The results could ripple out into Birmingham as well, inspiring changes that lead to a more livable community for everyone to enjoy. Come hear Dr. Price speak about these ideas and more. “If one project out of 10 goes through, then we’re successful.”

Dr. Dobbins and her students have complied several years of studies on Shades Creek especially in the area across from Samford University, that she will share with us. Much of the data is in the restoration area. Come hear Betsy’s presentation, plus get up to date information on salamanders migrating in 2015.